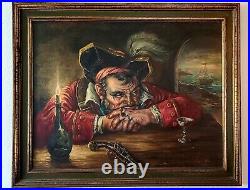 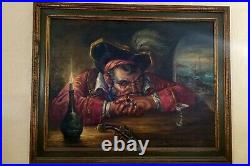 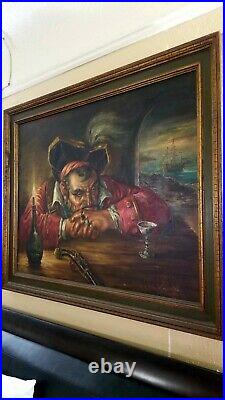 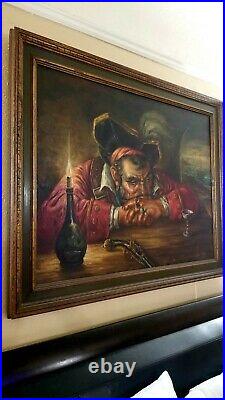 Endre Szabo " The Pirate Painting " ORIGINAL! DON'T MISS THIS EXTREMELY RARE CHANCE TO OWN A HUGE PIECE OF DISNEY'S HISTORY! Own a piece of Disneyland! T h i s painting was originally displayed i n corporate headquarters , then moved to the Pirates Of The Caribbean ride for a few years where Endre Szabo was contracted to paint one more for each of the Pirate Of The Caribbean rides owned by Disneyland at the time. I have had it verbally appraised and authenticated by Dr.

THIS IS A GREAT SIGNED ORIGINAL PAINTING BY WELL KNOWN AMERICAN ARTIST ENDRE SZABO. THIS PAINTING IS HAND PAINTED BY THE ARTIST, OIL ON CANVAS, SIGNED BY THE ARTIST ON Bo. Rn in Hungary, Endre Szabo was the son of a prize winning artist who was awarded medals and honors from various countries throughout Europe.

His education in art was quite extensive. He was taught to hold a brush by his father at the tender age of four, and completed his first portrait at the age of 13. Endre's formal education in art began at the Academy of Art in Budapest. His studies were interrupted by the war although, and he was forced give up his country. He subsequently continued his education in Italy for 2 more years.

From that point on, Mr. Sabo traveled widely, studying in particular the paintings of Rembrandt and Rubens in numerous museums throughout Europe. He lived briefly in Austria and also in Germany. 1950s South American Travels - Presidents, Diplomats and Religious Leader Portraits.

Szabo then moved on to South America. He traveled widely and resided in numerous countries over the course of 11 years. During these years Endre was quite prolific, painting several hundred portraits. While in South America, Mr. Szabo painted the portraits of the President of Peru and the President of Venezuela. In his travels throughout the continent he painted portraits of high-level government officials, religious leaders, diplomats and many other prominent personalities. Endre Szabo Becomes American Artist - New York, Philadelphia and Los Angeles. Szabo emigrated to the United States, where he settled in the Philadelphia area. During the next 4 years he worked in New York, Pittsburgh and Fort Lauderdale, after which Mr. Szabo moved west to Los Angeles, CA. About that time he took a great liking to Western Themed Character Compositions. In 1961 he was awarded 1st Prize for an oil and a pastel while in Philadelphia. In 1966 at a group show in Los Angeles he won first prize for oil. Then in 1969 he moved to San Antonio, TX. THE PAINTING IS IN VERY GOOD CONDITION, NO REPAIRS OR DAMAGES. The item "Endre Szabo The Pirate Painting ORIGINAL Disneyland -Pirates Of The Caribbean" is in sale since Monday, November 2, 2020.

This item is in the category "Art\Art Prints". The seller is "wemeto40" and is located in Long Beach, California. This item can be shipped worldwide.