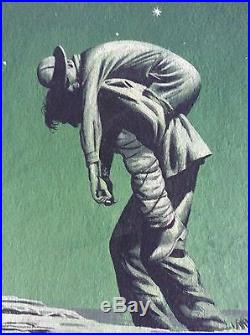 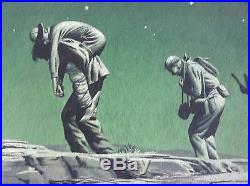 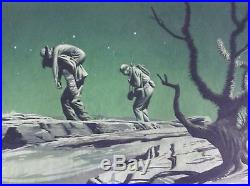 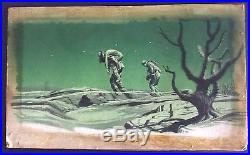 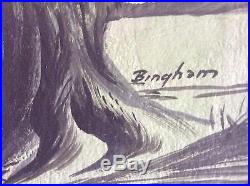 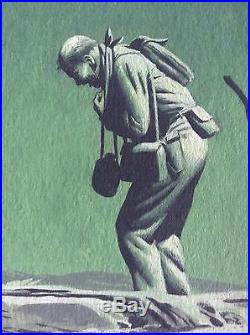 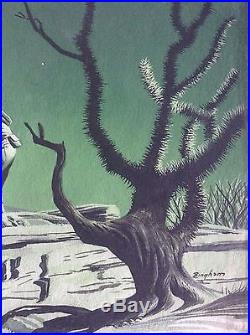 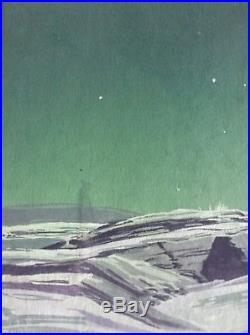 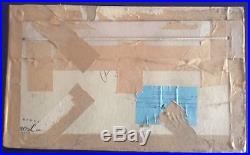 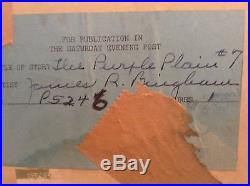 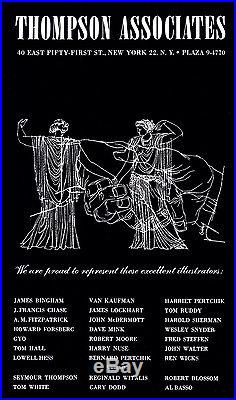 James Bingham listed artist (1917 - 1971). This piece was used for Saturday Evening Post in 1947 for an 8 part series titled, " The Purple Plain " This piece depicts two soldiers ragged from war, hunched over walking the plain while one carries the third man over his shoulders. This is the 8th and last illustration in the series. The writer of the story was H.

Measures in total 11 3/4 x 18 3/4. Image itself measures 8 x 16. Edges have pin marks for editorial review and where matting must have been. Image is in very good condition.

There is what looks like a vertical water mark on left hand side. A naval officer in WW2; also worked as an AAF animator. Provided art for Perry Mason and the revival of the Tugboat Annie stories for Saturday Evening Post (also did a Post cover); other work for Argosy, Good Housekeeping, Esquire. Few artists, before or since, worked on so many advertising series; Bingham's many accounts included The Airlines of the United States (keeping the idea of this travel mode alive during WW2), Association of Railroads (ditto), Maxwell House, Gulf Oil, Cannon Towels, Caterpillar Tractor, Philadelphia Whisky, Alcoa Steamship Company, Champion Spark Plugs, U S Steel.

Bingham was represented by Seymour Thompson in NY. He was among the best, most successful illustrators in the 1950's, including Van Kaufman, Lowell Hess.

(See photo of agency's ad). Lived for a time in artist's mecca, Westport, Connecticut and then to Florida in 1950. While there, he did many architectural renderings.

He also did work for Nieman Marcus and did the Chris Craft catalogue. Check out my other items.

BINGHAM Original Listed Signed Vintage Illustration War Sat Eve Post 1947" is in sale since Friday, June 23, 2017. This item is in the category "Art\Paintings". The seller is "nonnos_attic" and is located in Bayport, New York.