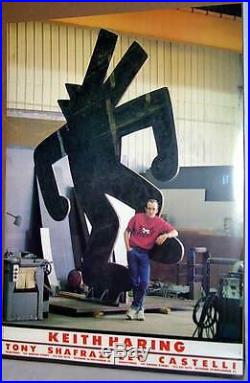 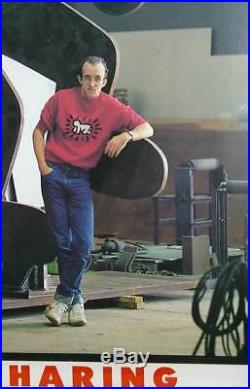 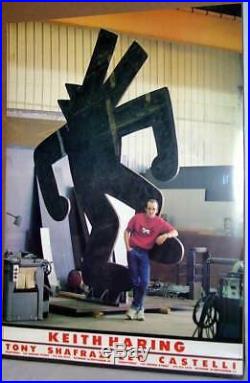 There may be some flash bounce on some parts of the poster images. FULL IMAGE OF KEITH HARING Litho Print-- TONY SHAFRAZI - "PAINTINGS - 163 MERCER STREET - 212 925 8732 - OCTOBER 26-NOVEMBER 30" & LEO CASTELLI SCULPTURES - 142 GREENE STREET - 212 431 6279 - OCTOBER 26-NOVEMBER 23. DIMENSIONS: 17" Wide X 24" Tall Note: Slight fuzziness on some portions of image is an artifact of photographing through plexiglass sheet. THIS NOTED HARING LITHOGRAPH WAS ISSUED ONLY FOR THESE two 1985 HARING EXHIBITIONS.

This is the ORIGINAL 1985 printing of a wonderful promotional lithograph photo-offset print on very heavy, glossy printing stock promoting these two Haring exhibits noted above. Only a limited number of these original show posters would have been made. According to various website sources, in 1985 Haring had his first sculpture exhibit at the Leo Castelli Gallery noted on this poster. He fattened up his lines and recreated his jumping, dancing figures in painted aluminum.

These sculptural figures became marvels of three- dimensional animation as they gleefully interacted with space. According to a second website in 1985, Haring began to paint monstrous and apocalyptic imagery as well as sexually explicit, sometimes homoerotic, subjects and exhibited them at both the Tony Schafrazi and Leo Castelli Galleries in New York. Keith Haring always wanted him because Tana was known not to hurry work or disturb the creative process. Ivan Dalla Tana was also a friend to Andy Warhol, Jim Rosenqvist and Jean Michel Basquiat and was often selected to document their artistic works. The poster image shows a photograph of Haring standing in front of a huge barking dog metal sculpture work-in-progress located inside a high ceilinged workshop.

The famous barking dog image sculpture behind Keith Haring is about 13 to 14 feet tall. This original photo offset promotional poster is 17" wide by 24" tall. CONDITION: Please view the high resolution images included in this listing to judge the excellent condition of this poster for yourself. Contact farber at farber dot info.

This ORIGINAL Haring Exhibit Poster is from the estate of my late sister who was herself an "outsider" artist and attended countless art exhibits in New York during the 1980s. The authenticity of this lithograph is absolutely guaranteed. This poster was found among a group of original show promotional posters from various Haring and other New York art scene artist exhibits in liquidating the estate of my late sister. This poster was carefully stored in 1985 after my sister attended this exhibit, away from light and heat, and never touched again until they were found recently. See my other listings for SIGNED HARING SHOW POSTERS, one with an original drawing by Haring with his signature.

While going to the bakery he met the photographer Tseng Kwong Chi who followed him on his metro-expeditions and photographed his work. Without the photographs none of his early work would have survived, because all of it was illegal and temporary..... FROM THE JACKET OF THE HARING BIOGRAPHY BY GRUEN.

"PORTRAIT OF THE ARTIST AS A YOUNG RADICAL" Keith Haring was the radiant child of the art world. His life and work were emblematic of the popular culture of the 1980s. What began as rebellious street art became, in a ten-year career, coveted and lauded fine art by decade's end.

But less than two months into the nineties, Keith Haring was dead from AIDS. Despite criticism of his populist approach to art-making and of his overt sexual themes, he produced an outstandingly diverse body of work and engendered a huge international public...... Like Andy Warhol, Keith Haring was a radical who came along to alter the definition of art and the rules for creating it. He undertook his work with intent and a serious passion. OTHER KEITH HARING ORIGINAL SHOW LITHOGRAPHS BEING OFFERED IN MY OTHER CURRENT AUCTIONS [OR SOON TO BE LISTED] INCLUDE AMONG OTHERS.

O HARING 1983 DRAWINGS SHOW PROMO LITHOGRAPH. Including INK DRAWING by Haring of his iconic dog chasing a man next to his signature. O INTO'84 SHOW PROMO LITHO - (Unsigned). The item "VINTAGE 1985 HARING PAINTING/SCULPTURE EXHIBIT ORIGINAL PROMO POSTER-LITHOGRAPH" is in sale since Saturday, February 25, 2017.

This item is in the category "Art\Art Prints". The seller is "radproject2" and is located in Hillsborough, North Carolina.