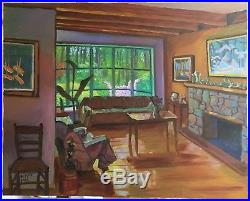 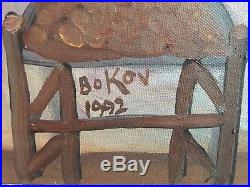 One of my favorite paintings, but need to downsize. I have seen many of Bokov's painting and folk art pieces, but this is still my favorite. Perhaps it's the subject matter, or the style, or both, but he has captured something in this painting that makes me not want to stop looking at it.

I find myself wanting to be in the setting he has painted. Please ask questions before purchasing. I guarantee it's authenticity. That new the original owner and location where the room that was the subject matter of this painting was taken as well as where it was hung after completion.

Both are the same room. This room was in the house of Jack "Moss Man" Miller, which was located in Collegeville, PA. According to this source Jack Miller let struggling artists stay with him and exchanged food and rent for art.

Some of the artist included Arnold Woods and Elling Reitans. According to his obituary Jack Miller.

Miller received his Masters degree in Pharmacology from Philadelphia College of Pharmacy and Science and an honorary PhD in Art Therapy. A Technician Fifth Grade in the United States Army he served in the European and Pacific Theatres during. Miller was the owner of a Japanese landscaping business which developed and maintained many Japanese moss gardens in the Philadelphia and surrounding areas.

Known as the "Moss Man, " he owned Dans La Forte, a 3 acre Japanese moss garden in Trappe which is included in the archives of American Gardens at the Smithsonian Institute. His garden was also nationally recognized in Architectural Digest and Garden Design magazines and The Green Scene, a publication of the Philadelphia Horticultural Society. Born in 1940 in Shostka, Ukraine, Konstantin Bokov immigrated to New York City in 1974.

Born the son of Viktor Bokov, the well known poet who perished in the Soviet gulag, Konstantin Bokov was an accordion player and sheep-herderbefore he became a self-taught artist and expelled dissident. When he appeared at the Morin-Miller Gallery in 1978 bearing a painting of a Tropicana juice carton, Carmen Morin brought it home. -- then their personal collection of Bokov's work grew to over a hundred pieces. Many paintings, sketches, collages and recycle assemblages were done, It's been said that Bokovs canvases and collage recycled pieces offer an image of New York that is both a scathing critique and profession of love.

This is especially evident in his pieces "Manhattan Madness (Road Repair)" and his Statue of Liberty series, here offering "Classic Lady Liberty". Bokov's impromptu work in public spaces has been the subject of an article in The New York Times. His current work was featured at a show in August at the Van der Plas Gallery on South Street in Manhattan. Bokov attended the Art Academy of Leningrad St. Petersburg, where he studied music and was introduced to painting.

After finishing school, he moved to Moscow, where he encountered Van Goghs Red Sunset, which ultimately inspired him to begin painting. Konstantin Bokov has appeared alongside Jean-Michel Basquiat and Keith Haring at the Now Gallery and in other shows including the Emerging Collectors Gallery, Morin Miller Gallery, the Grant Gallery, and the Monique Goldstrum Gallery. He showed at the 2008 European Outsider Art Fair in Vienna and the Outsider Art Fair in New York. The item "Vtg, Ukrainian, Konstantin Bokov, Oil On Canvas, Signed & Dated" is in sale since Tuesday, September 12, 2017. This item is in the category "Art\Paintings".

The seller is "widowhlper" and is located in Chattanooga, Tennessee. This item can be shipped to United States.